This Would Happen Later Today. 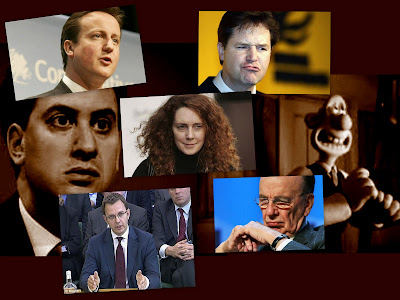 "The events that have unfolded in the past few weeks, culminating in the closure of  The News of The World and the arrest of its former editor and my initial appointment as Press Secretary,  Andrew Coulson, I make the following statement:
It is apparent that this action, in appointing such an individual to the heart of British Politics, was a grave error of judgement. This mistake has led me to realise that my own fitness for office is now questionable. Not least by myself. I therefore, with immediate effect intend to step down as Prime Minister, after taking the necessary steps to call an immediate General Election. I shall also urge my Party to not contest that election and call upon The Labour and Liberal Democrats to do the same. My reasons for such actions are that all three parties have allowed our political system to fall into a morass of immoral, corrupt and secretive deals in all areas of Government and that this can no longer be allowed to continue. Thank you."

"In light of The Prime Minister's statement I am duly bound to reply. On behalf of The Labour party I can categorically state that the behaviour of Alistair Campbell, whilst holding the post of Press Secretary to Tony Blair, was far cleverer, more devious and successful in not getting caught out, than Coulson. I therefore divorce myself from all previous dealings, over circa 18 years that my party had with News International.

The lavish parties, yachts and private jets, employed on our behalf by Rupert Murdoch, were all for the well being and good of The Labour movement. Our economic legacy proves how little influence they had on our great period in office. To this end I shall resist the call by Mr Cameron not to contest the forthcoming election. Indeed I can state at this press conference that any manifesto pledges and guarantees not to drive The Nation even deeper into debt, will be reneged upon, as soon as we enter Office once more, in order to continue the traditions of sleaze and corruption for which all British political parties are rightly famous. Thank you."


"It is my duty to respond to the statements of my right dishonourable dear friends, The Prime Minister and the leader Of The Labour Party. This moment is a tipping point in the politics of this once great country now brought to its knees by the years of corrupt and corrosive relationships of the other two parties. Whilst their underhand and despicable governance has led us to the brink of destruction, my party, under my leadership, has kept the only hope of salvation we have alive.


My confidential and secret meetings with our great European State has kept the door open to sacrifice our future for the good of the moral, upright and totally incorruptible Federal European States. I am therefore able to announce my party will fight the next election funded wholly by the European Commission.


Subject to the inevitable victory, if not at the first time of asking then at the re-run, in which the financial burden will no longer permit any opposition , I will immediately close Parliament and subsume all future governance to The EUSSR. I am guaranteed that this State Of Liberata will have the extreme honour of providing the very first ever President of The EUSSR unified in the dream of a 1984 Utopian existence. Thank you."
Posted by Oldrightie at 2:36 PM

Email ThisBlogThis!Share to TwitterShare to FacebookShare to Pinterest
Labels: A better world