Plagues And Disease Have No Boundaries. 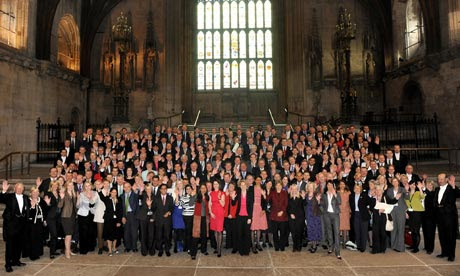 You expect corruption to be rife in the town halls of our blighted and miserable cities. But this black death of morality is sadly, like all diseases, not confined to those bastions of greed, nepotism and patronage. Even in the sleepy town of Leominster and the rest of  Herefordshire, with its wide pastures and green fields, rolling countryside and idyllic settings, we see the looting and corruption so beloved of our political classes.

Maybe this plague on a poor, sparsely populated and trusting environment was introduced by an urban, smug and superior class of animal, eptitomised by North Herefordshire MP, Bill Wiggin and wholly embraced by its dubious "nasty party" Conservative Association.

Let's look briefly at the stomach churning goings on - all a matter of public record.

The Conservatives took control of Herefordshire County Council back in 2007. They shared a coalition with Independent Councillors in the four years prior to that. Councillor Roger Phillips was the council leader for eight years. After 2007 he shared that leadership with his Deputy, Mrs June French, a retired council officer  from  London.

Notwithstanding generous allowances for those heady posts, such largesse for their "public service" obviously was not enough. As with council officials and their elected thieves and looters all over the land, it was decided the battering ram to break down the doors of morality and decency would be in the form of "limited companies" created by the council. Their friends, developers and a whole host of nefarious contacts, not least chief executives, were seduced by the lure of secretive jobs and placements, well hidden from the decent but gullible victims of their cash cows.

I give you just two examples. A veritable tip of the iceberg our weak local and national press fail to determine or are part of. Hereford Futures Limited, members include Mr Roger Phillips. A little more spadework might determine his remuneration and status. An enterprise formed from his time as Leader of The Council. A major remit of this "limited to pals and moneybags" Company is a massive building development in the heart of Hereford City. Since this post was first considered Mr Charles Ingleby and Councillor Roger Phillips have both terminated their directorships! However the new Council leader and Chief Executive remain directors. What, I wonder are their remunerations? Bull earns a massive six figure salary and significant pension entitlements. Jarvis will be on very large incomes from his councillor expenses, committee and leadership emoluments.

On the board are city speculator friends, property developers and those blessed with secretive powers and influence. I'm sure deep in the bowels of this "mint" root will be some startling names.

Then let's look at Phillip's former Deputy Leader, Mrs June French. Her altruistic yearnings were thrown hastily away in May, 2011 as she quietly stepped down after many years in Herefordshire Council. One of her last portfolio enterprises was the creation of yet another "limited" Company. Limited to friends and cohorts, of course. Though taking on board the newly stood down Deputy leader, in accordance with "the rules" this expensive advert had to be taken out! Jobs for the boys and girls.

Another dubious character in this pantomime of corruption is Annie Caulder. Note this,

"Senior stakeholders have been involved throughout and subject to final approval from JMT, HHT management team, Cabinet, PCT and Trust Boards in September, a procurement exercise for one or more strategic partners can commence. We estimate that at best we will have implemented the new arrangements by Spring 2010 and at the latest by Summer 2010. To make the change and do it within these aggressive time scales we will
need to rapidly build a transition team that includes; commercial, programme management, human
resources and change management skills. We intend to appoint a commercial manager and shared services director as early as possible."


That is taken from this document. One wholly written by Ms Caulder. An exercise overseen by the "Cabinet", of which Ms June French was Deputy Leader member.

Search deeper and you see Bull, the Chief Executive and his friends on several private company boards. Now even on a Council's Chief Executive  salary of £226,700, you can bet payments are made for these positions elsewhere. Quite disgustingly dreadful greed.


Then we hear of  this. No qualms whatsoever of stating the architect of this Company as a councillor is now its chairman! Furthermore the priapic Bull is also on board!
This location gives a splendid flavour of that rather nasty taste. Undoubtedly tip of an iceberg.  Just to add further to the symptoms of this plague, the author of the link was hounded from his home and forced into "purdah" because he dared to challenge these looters. Censure documents were forged by town councillors against his efforts to quell this outbreak of black corruption.

Particularly their probable Brigand in Chief, Wiggin. More public outcry, well whimpering, is here: read and weep. As a sidebar, Brigadier Peter Jones, forger in chief of Leominster, County Councillor and another "grab what you can" and run away from any spotlight, looter, was also found to be receiving many thousands of pounds in expenses for his "volunteer" work! His sign off on those payments, a council employee, resigned smartly to protect his pension, when challenged.A further issue and scary scenario is highlighted here.

So there you have it. If Herefordshire is this mired in such raping of the public purse, how many billions are we seeing looted nationwide? I would suggest, collectively, enough to considerably reduce our £150 billion deficit, such is the scale of this accepted criminality and fraudulent gang of "robber barons".

Herefordshire people are poor by national standards. They are vulnerable to these blow ins with their endemic, urban trained corrupt practices. People probably deluded enough to feel superior in their expertise. I suppose they are when it comes to multi-million pound rip offs of this weak and poor County. Sadly it just mirrors British bureaucracy from top to bottom. I just pray they have difficulty sleeping and hiding their tax liabilities.

Email ThisBlogThis!Share to TwitterShare to FacebookShare to Pinterest
Labels: Protest